Next
Push button for menu 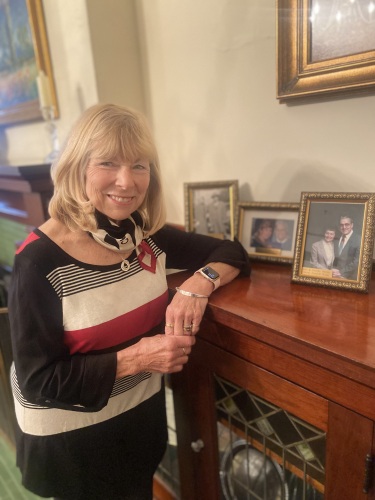 As the granddaughter of our Founders, Judy has been around funeral service for her entire life. Her father, William "Bud" Owens ran the funeral home from 1962-1986. At that time, Judy's husband (Jim Yost) purchased the funeral home and ran it until his death in 2014.

Judy has been active throughout the Champaign community for 50 years including Junior League of Champaign-Urbana and the Make-A-Wish Foundation. Currently she is involved in the U of I Extension Master Gardener's Program. Judy enjoys traveling and spending time with her 5 grandchildren and 7 great-grandchildren. 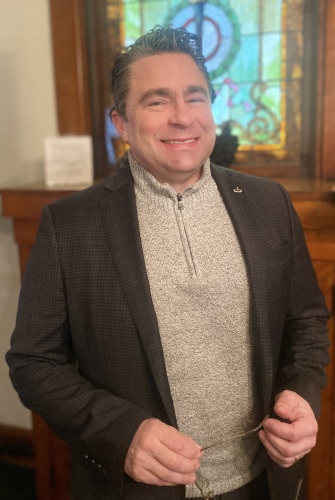 Jay served in the Army for 6 years including 3 years with the 82nd Airborne Division. He graduated from Worsham College of Mortuary Science in September 2000. He completed his internship at Owens Funeral Home in 2001 and has been a Licensed Funeral Director and Embalmer for over 20 years. Jay is the fourth generation of the Owens family to work at the funeral home and is the great-grandson of Bill and Geneva (founders).

Jay lives in Seymour with his wife, Ashley and their daughter, Allison. He is a competitive ultra-cyclist and enjoys running. Jay is a member of the American Legion and Rotary International Club, both in Mahomet. He is also a third degree member of the Knights of Columbus. 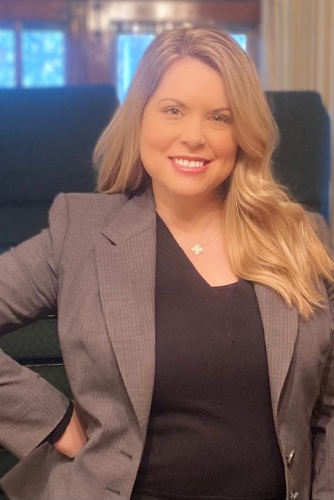 Julia "Jill" Yost is the great-granddaughter of Bill and Geneva (founders) and the fourth generation of the Owens Family to serve the Champaign County area. She joined her family at Owens Funeral Home in 2006. She received her Bachelor of Science degree in 1996 from Illinois State University. She completed her Master's Degree in Counseling Psychology in 1999 while living in Washington State and worked as a Clinical Counselor for several years.

Julia graduated from Vincennes University in May 2010 with an Associate of Science degree and became a Licensed Funeral Director and Embalmer in 2011.

She resides in Mahomet and is the proud mother to 2 children, Nate and Cora. Julia is passionate about animal rescue, as such she shares her home with her rescued German Shepherds, Chloe and Seamus. When she's away from the office, Julia enjoys traveling, hiking, gardening and home improvement projects. 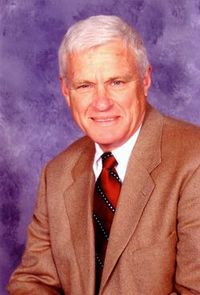 There will be a visitation at Owens Funeral Home (101 N. Elm St, Champaign) on Wednesday, July 30 from 4-8 pm. The funeral service will be at Holy Cross Catholic Church (403 W. Clark, Champaign) on Thursday, July 31 at 10:00 am with Rev. Fr. Dennis Spohrer officiating. Interment will be at Woodlawn Cemetery, Urbana.

Jim was born on March 19, 1945 at Fort Sill, OK to LTC (ret) DeVerne R. Yost and Doris Adele Koos Yost, the oldest of their three children. He was preceded in death by his father.

In 1965, while on a cross-country/track scholarship at Murray State University (Murray, KY), Jim became enamored with a “pert and petite” coed from Champaign, Judy Owens. They were married 2 years later on August 26, 1967 at Holy Cross Catholic Church. Jim was in ROTC in college and upon graduation, he earned Regular Army Commision and began his career as an Infantry Officer. A proud Army veteran, Jim’s military career included serving with the 1st Infantry Division, 82nd Airborne Division in Vietnam (bringing the colors home for the Brigade) and 10th Special Forces Group. As an Army brat, Jim often declared that he had no hometown but after he completed 8 years of service to his country, Jim and Judy chose to move back to Champaign to raise their children. Together they have 2 children; James D. Yost II “Jay” and his wife, Ashley and Julia “Jill” Yost, both of Mahomet.

In 1978, Jim joined the Owens family business as a funeral director at Owens Funeral Home. He worked tirelessly at this profession no matter how many weekends and holidays were sacrificed. Jim ran the business with integrity and honor, treating every person with the respect they deserved because he believed “every person was entitled to a decent burial”.

Jim approached everything in life with unparalleled passion and vigor. Always a gifted runner, he distinguished himself his Senior Year of High School (1964) as the double state champion of Kentucky, winning both the mile and half-mile. After his collegiate running career concluded, he saw the 26.2 miles of the Marathon as his next major goal. He ran many during those years but his personal best was 2 hours and 38 minutes. Never one to back down from a challenge, Jim moved upward to Ultra-Marathons. His proudest accomplishments were competing in a 3 day (150 mile) race across Illinois and a 24 hour race in which he totaled 135 miles around a track. Jim also organized and led team relays including River to River and Hood to Coast, both for over 10 years. In his later years, Jim embraced cycling. He was proud to have participated in Paris-Brest-Paris (a 750 mile event in France) in 2011 with his son and his brother.

A self-proclaimed Francophile, Jim greatly enjoyed guiding Americans around France and introducing the French lifestyle to his family and friends. Jim was particularly fond of the Normandy region due to his “unhealthy fascination with World War II”. Jim and Judy donated numerous trips to France to benefit local charities including Mahomet Area Youth Club and Presence Covenant Medical Center.

Jim’s grandchildren include Aaron Yost of Rantoul, Cassie Yost of Mahomet, Nathaniel and Cora Strigotte of Mahomet and Allison Yost of Mahomet. He was also a great grandfather to Marcelline Yost of Rantoul. His grandchildren saw him as invincible and bigger than life. They say that he was the smartest man they ever would know and enjoyed his enthusiastic storytelling. He supported his family through every endeavor no matter how silly, small or strange.

Other survivors include his mother, Doris Yost of Worchester, MA; his sister, Dr. Janice Yost of Worchester, MA and his brother, Rick (Cathy) Yost and their daughter, Shaina of Palm City, FL; 2 sister-in-laws, Kathy (Bob) Keller and Terry (Bruce) Gocking and a brother-in-law, Jeff (Vie) Owens, along with 3 nieces and 1 nephew.

Jim firmly believed in the mission of the Airborne Demonstration Team (ADT), to honor and serve the memory of the men that fought and died to preserve America’s freedom during World War II. The family asks that donations be made to ADT, P.O. Box 67, Frederick, OK, 73542.

Airborne! All the way! 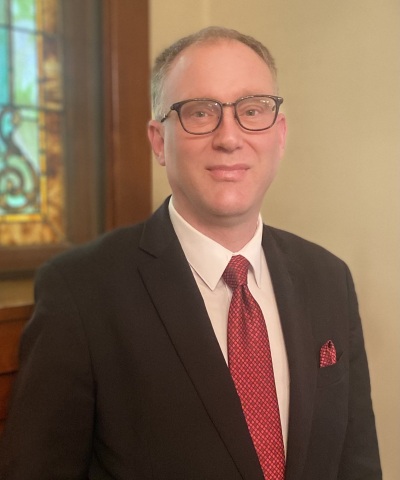 Stephen Born, CFSP, received his mortuary science degree in 2001 at Worsham College and is a member of Pi Sigma Eta, a mortuary honors fraternity. He completed his certification in Post-Mortem Advanced Reconstructive Surgery at the Fountain National Academy (FNA) of Professional Embalming Skills in September 2015. Stephen started with Owens Funeral Home in March 2016. He is the Funeral Director Board Representative for the Illinois Opioid Crisis Response Advisory Council and a certified Naloxone Instructor for the Illinois Department of Public Health.
With his additional free time, Stephen voluntarily deploys to disasters as the Regional Disaster Coordinator for the Lutheran Early Response Team (LERT) in Central Illinois. As a licensed airplane pilot, he enjoys flying with his family on weekends.
Stephen resides in Champaign with his girlfriend Cristin and daughter Siciley. 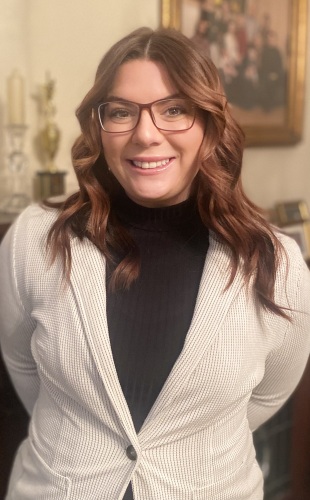 Megan is a 2022 graduate of Worsham College of Mortuary Science, who has been with Owens Funeral Home since 2021. She is a Champaign County native and she graduated from St. Joseph-Ogden High School. Megan worked at the University of Illinois Police department for five years before discovering her passion for funeral directing.

She and her significant other, Shawn, live in Villa Grove. They enjoy traveling and going to amusement parks in the summer. In her spare time she enjoys; working out, watching Real Housewives on Bravo, and cuddling up on the couch with their two rescued Pitbulls, Arlo and B. 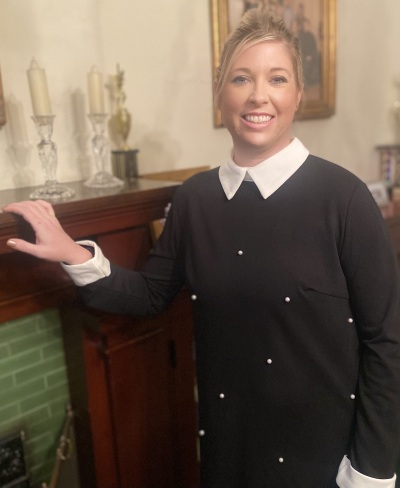 Ashley grew up in Ogden and graduated from St. Joseph-Ogden High School. She worked at Champaign County Nursing Home as a CNA from 2002-2012. Although she loved her co-workers and residents, Ashley chose to leave the nursing home and stay home with her daughter, Allison.

Ashley started working at the family business in 2014.  Her responsibilities are varied and crucial to ensuring that funerals run seamlessly. Her friendly demeanor and big smile are always a welcome sight at the front door during services.

Ashley lives in Seymour with her husband, Jay, their daughter, Allison and 2 fluffy Huskies named Daisy and Cannonball. In her spare time she walks dogs for a local pet sitting service.

A year of daily grief support

Our support in your time of need does not end after the funeral services.  Enter your email below to receive a grief support message from us each day for a year.  You can unsubscribe at any time.